Everyone has a different story about their pregnancy experience, so why do we only ever hear the cliché things? Morning sickness, natural over epidurals, sleepless nights, major mood swings, etc. The clichés get even worse when people hear you are having twins. I thought I would write out my story to share how having twins wasn’t such a terrible experience. Almost everything I read during my pregnancy about having twins was horror stories. A lot of those things are true but they don’t define a pregnancy, they just happen to be a few side effects of bringing a beautiful bundle of joy into the world (or two bundles of joy).

Dinner date with our dear friends the Sheffields

The first thing people asked me when I said I was having twins was, “did you get pregnant naturally or through fertitly?”, it wasn’t always said that bluntly but yes, people actually asked that. The first thing I learned was that people really say/ask the craziest things when you are pregnant, and they also love to tell you all the horrible things about being pregnant or being a parent. We also got a lot of “you are going to have your hands full” and “you better get your rest now”.

Here is my story and my happy pregnancy:

At the beginning of June, after returning from a work trip, I had a suspicion that I was pregnant. I didn’t want to get Daniel’s hopes up if the test came back negative so I picked up a test and took it without telling Daniel. Early on June 4th I woke Daniel up by whispering “I am pregnant in his ear”. He didn’t believe me at first and kept saying he wouldn’t believe it until a person in a white coat told him. It finally settled it that it was real and we were both so excited! We had been trying for a while and were very happy to hear the news.

At my baby shower with my Mother-in-Law, Lisa, and Sister-in-Law, Sarah (who was also pregnant)

Things got dramatic early on…I got hit hard with the pregnancy “morning sickness”, which is more like all day sickness. Daniel & I had booked a cruise in February for the end of June, not exactly the best timing. We got to the port and I made the mistake of being a little too honest and forthcoming with the fact that I was pregnant. I hadn’t had my first appointment yet because I was only 6 weeks pregnant so I didn’t have a form from my doctor. The boat doctor informed me that they didn’t want to risk having me on the boat without doctor consent in case I had a miscarriage. We were very upset and frantic. Long story short, a doctor at our doctor’s office went out on a limb for us and emailed a consent form saying I was able to travel. We got lucky; he hadn’t ever met me and didn’t have to email anything. The boat wasn’t too bad on the morning sickness surprisingly but I was very tired and had to take things a little more easily.  We also didn’t know at that point that we were having twins, which later explained why I was so sick.

Both of my grandmothers and one of Daniel’s grandmothers are twins so we had joked many times about how our chances of having twins were really high. We got asked that a lot too, “do twins run in your family?”. The day of our first doctor’s appointment I had been joking with Daniel’s sister how we were going to find out we were having twins. When the doctor did the ultrasound and actually informed us we were having twins I started laughing and thought he was joking. Daniel was so excited, as was I, it just took me a second to take it all in. All of our family and friends were super excited for us too. Definitely a shock for both our parents. Neither of them had any grandchildren and they were then informed they were getting two at once.

My morning sickness was not very fun. It lasted about 4 months and made it difficult for me to work and to gain weight. In the first 4 months of my pregnancy I only gained 4 pounds. The doctors were not super happy with that so I had to go visit a nutritionist. I can honestly say I had never hated food so much after that. The nutrionist put me on a 3000 calorie diet and the first few meals did not stay down at all. Who on earth is able to eat 12 servings (1 cup = 1 serving) of protein. I was somewhat vegan before the pregnancy so this was not fun at all.

Even though the morning sickness was really rough, I decided pretty early on, and I think it is just my easy going personality, to have a good attitude about it all. I feel like it is all what you make it. I had some melt downs, I won’t lie, but I really tried to stay positive. After the morning sickness passed, everything was going smoothly. I started gaining weight at a normal rate and all my doctor visits showed our two baby boys growing at a great rate.

My baby belly was growing so fast. It was fun to keep track and watch it grow. At the end of the pregnancy I made a video to show the progression of my belly. It was super fun to look back.

Here are a few pictures of how my belly grew:

The day of the birth:

On the morning of January 24th I had some familiar contractions, they were light and not very painful, but I had lost my mucus plug (sorry TMI) so I thought I should call the nurse line just to be safe. I talk to the nurse and she then talked to the doctor on call and suggested we head to the hospital to be safe. We packed up our stuff in the mini-van and headed to Piedmont Atlanta. I wasn’t in much discomfort and we assumed they would be sending us home as soon as we got there.

They hooked me up to the monitor to track contractions. When I called in from home I thought my contractions were 7 minutes apart for about 1 minute. When the monitored them they were at 2 minutes apart for 1 minute. They then did an ultra-sound and found out that both babies were transverse (breech) and that there would be no possible way to have them vaginally. We knew that at least one of the boys was breech and had been prepared to have a C-section if doctors decided it was the best option.

I had decided early on that I would keep an open mind and easy going attitude as far as my “birth plan”. We had done the birthing class just in case and to be well informed, so we were prepared for anything that came our way. I believe my easy going attitude made things go so much smoother than they could have.

Things went fast once they assessed the situation. We arrived at the hospital at 9am and I was in the operation room by 10:30am getting my epidural. (The epidural really is no fun by the way… Daniel couldn’t be in the room and I was so nervous I was shaking like a dog. The pain wasn’t that bad, it was the nerves that got me. I am not really a fan of needles…) The boys were born 2 minutes apart at 11:11am and 11:13am. The C-section went pretty well. I did have some issues when they started stitching me up so they ended up having to give me general anesthesia.

Emerson had some problems with his breathing that the nurses needed to keep an eye on so he wasn’t able to come to our room till about 5 hours later. That may have been the hardest part of the whole thing. I wasn’t really able to see him after he was born until about 5pm. Daniel saw him while I was finishing up in the operation room and the rest of the family saw him through the window while he was in the nursery getting attended to. It helped to have Logan in the room though. 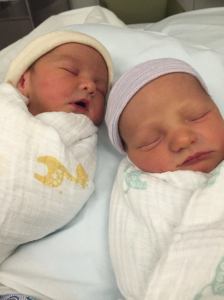 Logan on the left and Emerson on the right

I was in love! People always say how amazing it is, that there is nothing like it, and they were telling the truth. Your heart just grows and being blessed with two boys was almost too much to take! They instantly had Daniel wrapped around their finger. He had to do most of the diaper changes since I couldn’t get out of bed for the first few days (he was amazing and I couldn’t have done it without him!). Both boys ended up being very healthy and all the nurses couldn’t get over how big they were for twins. We stayed in the hospital for 5 days. I had a few problems with my blood pressure so the doctor wanted to keep me an extra day. We had lots of family and some of our friends visit us in the hospital. We were very anxious to be headed home. Daniel especially, since he had to sleep on a very uncomfortable bed/couch (they really should create something a little more comfortable for dads).

Daniel’s parents and grandparents greeted us at our home. We adjusted to home life pretty easy. I was able to get about 3 months off work, such a blessing, and Daniel works from home. I wouldn’t be able to do it without him at home. The boys are almost 6 weeks now and have grown so much! Logan is just over 10 pounds now and Emerson is about half a pound behind him. They are 21.5 inches long and wearing size 0-3 months now. They definitely grow so fast! 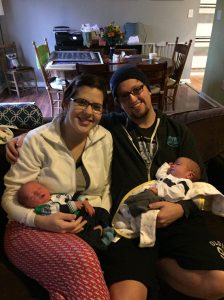 At home with the boys!

Here is a list of the top 5 things we have learned so far:

There are lots of other things we learned but those are a few of the big ones I learned.

This is definitely the longest blog I have ever written and it doesn’t even tell it all but I hope this was at least a little glimpse into what it was like to carry these two beautiful boys for 37 weeks. There were a few rough moments along the way but that all faded away the second I held these boys. I can’t wait for all the new things being a parent has in store for me. I am sure things will only get harder but it is such a blessing God has given us. I only pray that we don’t mess it up! Make sure you keep coming back as I share about our journey raising these twin boys. 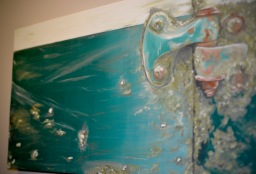 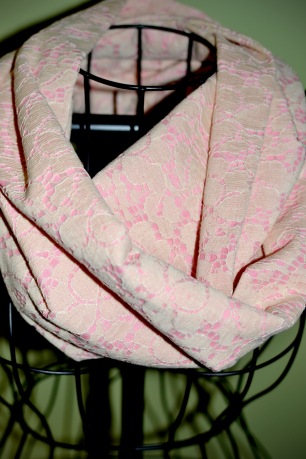